Zombies take on The Big Apple! 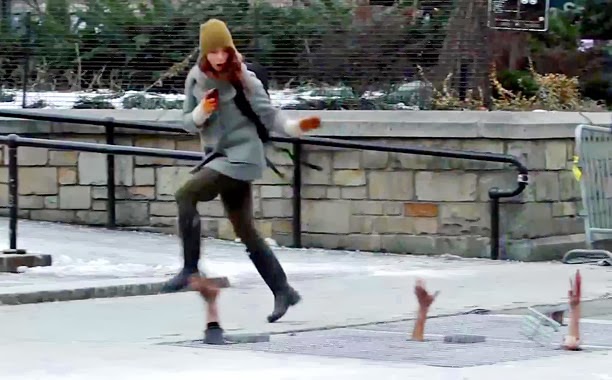 As if suffering through a polar vortex wasn’t bad enough, now New York City residents are enduring zombie attacks.
AMC’s The Walking Dead staged a prank in Union Square that put the undead under a sewer grate to scare unsuspecting pedestrians (video below). According to AMC, all the victims were indeed regular people, not actors.
The stunt was to promote the return of the hit drama series Sunday night and marks the latest example of Hollywood using viral prank marketing, particularly for horror projects.
For the remake of Carrie in October, marketers staged a telekinesis stunt in a coffee shop (54 million views), and for the film Devil’s Due last month, pranksters unleashed a possessed “baby” in a remote controlled stroller (41 million views). Also, LG pranked job applicants in Chile in September with a “window” that was actually an 82-inch TV screen showing a world-ending meteor attack outside.
Here’s the newly released Walking Dead video. One suspects the actors were kept beneath the sewer grate for their own protection!