MARK YOUR CALENDARS FOR THE UPCOMING 'ZOMBIE NIGHT!' 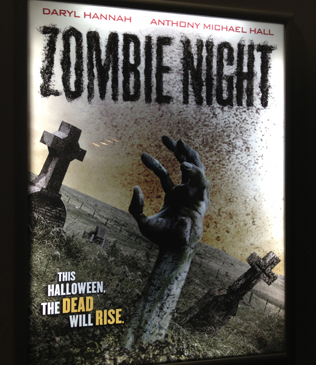 Where do you go after the lunacy that was Piranha 3DD? You go to The Asylum. That’s where John Gulager ended up to helm their latest zombie flick, Zombie Night, starring the likes of Daryl Hannah, Anthony Michael Hall, Alan Ruck, and “Mrs. Partridge” herself, Shirley Jones.
The director of the Feast franchise and the ill-fated Piranha 3DD pairs with the writers of last year’s Asylum-produced Rise of the Zombies and the recent Syfy original Ragin’ Cajun Redneck Gators for this latest foray into walking dead territory starring a former movie mermaid, a guy who has already dealt with “The Dead Zone”, Ferris Bueller’s best friend, and a 1970’s singing TV mom.
Synopsis:
Two families in a small American town face off against zombies in a long night of horror, torn between helping each other and saving themselves.
Zombie Night premieres on Syfy October 26th at 9/8 Central as part of their “31 Days of Halloween”. Look for what will most likely be the gorier uncut version on DVD/Blu-ray December 10th.