Zombie Cover-Up By The Government? Never! 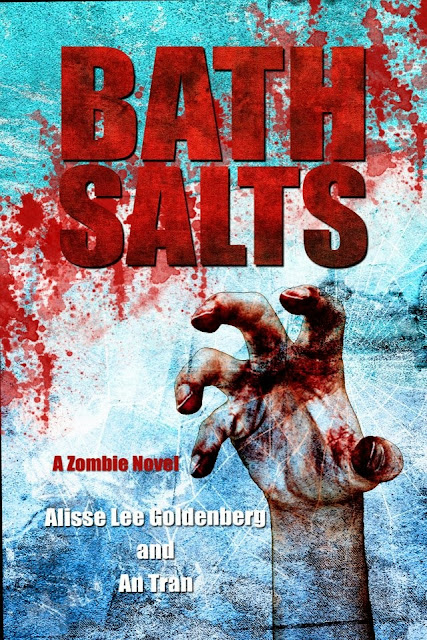 Zombies aren’t just an American phenomenon. Two young ladies, Alisse Lee Goldenberg and An Tran, have put together what they call “An epic Canadian zombie novel told entirely through diary entries.” That is their new book Bath Salts: A Zombie Novel.
And these two seem obsessed with Zombies, take a look at their facebook page and you see photos of World War Z author Max Brooks, Norman Reedus from The Walking Dead, zombie tattoos and links to George A Romero’s Night Of The Living Dead Live.
This is how An pitches the book to prospective readers:

Do you remember the drug, Bath Salts? That incident where the one guy ate the other guy’s face?
It was all a government conspiracy. The government made up the drug to cover up zombie outbreaks. Two women realize what’s happening and flee to Nunavut to ride out the outbreak. But what starts happening, and what they don’t realize, is that they’re moving apart in two very different paths. One girl believes that to survive the zombie outbreak means you’re still human, but you have all your morals and ethics intact because that’s what makes you human. The other believes that surviving a zombie outbreak means you’re still a human… By any means necessary. Nothing is sacred.
So the ethical one, Ali, doesn’t realize she’s living with someone, An, who could potentially at any time feed her to zombies, sell her to bandits, something, anything, to save her own skin. So when the blood dries, who’s still alive?

So if you are looking for a different take on the zombie phenomenon, check out Bath Salts: A Zombie Novel by Goldenberg and Tran available in both digital and print formats.