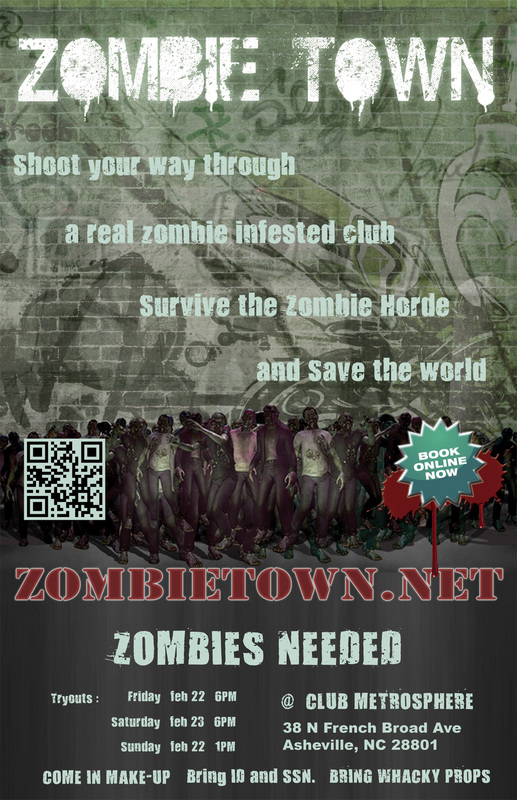 Zombie Town will hold auditions for videographers and actors this weekend at Club Metropolis in downtown Asheville, N.C.
The zombie-themed amusement business is “a live-action, realistic-immersive experience,” according to a news release from the company. Customers can live out the terror of a full-scale zombie apocalypse as they try to shoot their way out of a zombie-infested club using airsoft guns.
The live-action experience will take place every weekend at Metropolis starting in early April, said Kelly Denson, Zombie Town spokesperson. The club will be transformed into a post-apocalyptic world where participants must shoot zombies and find “Patient Zero” to save the world.
“Participants will be given a shotgun, some ammo, a flashlight and tasked with finding the cause of the zombie outbreak in a multi-level nightclub that is crawling with undead,” according to the release. “You will need your wits about you while you shoot your way through the horde of zombies, uncovering the vital clues that the remaining scientists need to find a cure.”
Zombie Town will be open Friday evenings and on Saturdays and Sundays.
Actors auditioning this weekend must come in full makeup and costume at the time of the audition and will be expected to stay through the end. Videographers must bring their own equipment and they will film the auditions, which will be similar to the actual experiences.
Video must then be edited into a minimum two-minute reel as an audition for videographers who will be hired for actual shows. Videographers will have 10 days to submit their videos.
Auditions will take place at Club Metropolis at 38 N. French Broad Ave, Asheville, from 6-8 p.m. Friday, Feb. 22; 6-8 p.m. Saturday, Feb. 23; and from 1-3 p.m. Sunday, Feb. 24.
Visit www.facebook.com/ZombieTownUSA for more information. The website for “Zombie Town” has not been completed, but will be available at www.zombietown.net.
To schedule an audition, email xavierhawk@gmail.com.