CHECK OUT THIS INTERVIEW WITH CHARLIE ADLARD - ARTIST OF 'THE WALKING DEAD!' 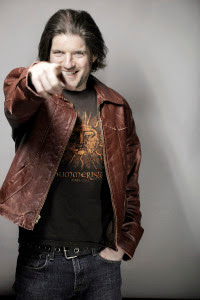 Charlie Adlard has been the illustrator for The Walking Dead since its 7th issue. Now issue #106 is out and Charlie has done 100 issues of the comic. For issue #106 there was a limited edition released. It was done by Infinity & Beyond in the UK where Charlie lives. The cover for it is a rendition of the first issue but Charlie has replaced the glass fronted store with Infinity & Beyond’s shop and instead of Rick he has place himself. Photos of Charlie outside the shop was taken, Charlie added a few personal touches, such as the drum kit as he is in a band called Cosmic Rays, the Star Wars Lego kit and of course his car and the cover was done. It was then colored by Paul McCaffrey.
I called Charlie to ask how it feels to have 100 issues of The Walking Dead on his resume and here is what he said.
Read on!