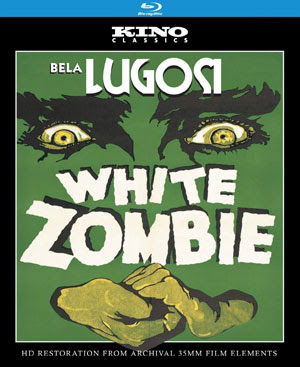 Kino's remastering and re-release of White Zombie, generally regarded as the original zombie horror feature, is suitably timed. The subgenre hasn't only endured, but persists at the height of its popularity, neck and neck with vampire stories in a cultural race to the bottom, their respective "twists" on generic boilerplate masking a dead-eyed derivativeness. For the zombie film (or comic book, or cable television drama), that boilerplate was struck by George A. Romero's Night of the Living Dead in 1968, and its subsequent sequels established a loose conception of the undead threat: lumbering, beholden to no centralized authority, sensitive to headshots and decapitations.

If, according to Franco Moretti's "The Dialectic of Fear," the vampiric threat (at least as embodied in the character of Count Dracula) operates chiefly as a metaphor for monopoly capital, binding those English bourgeois interlopers to his spell and extracting the blood of their industry, then the zombie poses a more anarchic, horizontalized threat. In post-Romero, hyper-allegorized zombie cinema, the hulking undead mass can be generally understood as the anti-Draculean annihilation of capital. Flesh and blood are acquired, but not retained; civilization is destroyed, but not remodeled. If zombies seem infinitely spongy as functional allegories for this or that, it's their non-hierarchic function that retains the kernel of their monstrousness.

White Zombie is interesting—even if it's just in rough historical register—precisely because it's not this kind of zombie movie, and so casts into relief the radicalism (however incidental) of genre-definers like Romero. In 1932, there was no zombie-cinema boilerplate. And so screenwriter Garnett Weston and director Victor Halperin drew liberally from the Dracula mythos, going so far as to cast Béla Lugosi, fresh off of Tod Browning's 1931 Universal feature, as Murder Legendre, a white voodoo master enslaving a class of brain-dead Haitian laborers. In the film's most remarkable scene, one in an assembly line of zombies seen manning a sugarcane mill falls into the grinder and is pulverized off screen as his brethren drone on obliviously. It's as fine an image for postcolonial capital pillaging as anything out of Bram Stoker's European monopoly mode.

In White Zombie, it's not an earthbound extraterrestrial satellite or some other such Atomic Age fallout the reanimates the dead, but good old-fashioned racist voodoo. Yet the film isn't an elegant parable about labor or colonialism. Rather, it defers that imagery to a more blandly straight-ahead horror story of a plantation owner (Robert Frazer) enlisting the help of Lugosi's voodoo industrialist to enslave Madge Bellamy's Madeline. Among the stiff acting and slapdash editing rhythms, White Zombie offers some nice touches. There's Lugosi's typically charismatic performance, and Bellamy's unsettling believability as a zombified love slave, her porcelain visage and puckered lips accented by a hollow stare that seems to tacitly question the role of post-Pickford Hollywood ingénues as vacuous star objects.

It's tempting to connect this primitive zombie feature with Jonathan Levine's Warm Bodies, the latest of many revisions on that post-Romero generic model. In both, zombie-ism is more of spell than irremediable diagnosis, the kind of thing that can be broken by the soppy rule of true love. If Levine's film seems like little more than opportunistic cash-in on the runaway success of the Twilight filims, then White Zombie seems no less a similar redoubling on the success of Browning's Dracula and especially Lugosi's enigmatic screen presence. At their apex of their allegorical authority, zombies may fundamentally destroy. But that doesn't mean their inexhaustible popularity as monster du jour can't be harnessed to the whims of real-deal market maneuvering, their principally anarchic menace yoked to the proverbial voodoo master of capital.

Kino Lorber's White Zombie remaster draws from two main sources. The bulk of the film is cut from the 35mm negative, while a few scenes are worked in from a 16mm print, creating an obvious, if understandable, waffling in image and sound quality. The restored print does the film no real favors, removing all the grain and appearing overly enhanced, which only works to reveal the loosely stitched seams of this middling indie horror film. A grainy, more authentic-feeling version of the film packaged with the disc's extras proves the preferably way of watching the film. The audio is fine, considering the age and low budget of the film, albeit with a few noticeable lapses in dialogue tracking.

Curiously, Kino has decided to package their new remaster with a "raw" version of the film. Considering what may be generously called the coarse charms of White Zombie, the battered version actually benefits the material. For all intents and purposes, consider this the "real" White Zombie. Film historian Frank Thomson's commentary track proves fairly informative, even if it errs toward the light and anecdotal. Also included is a 1951 theatrical reissue trailer, a stills gallery, and a hilarious "Intimate Interview" with Béla Lugosi, in which he stalks around his garden offering obtuse answers to a plucky female reporter, eventually scaring her into some shrubs. It's an interesting look at how press materials functioned in the 1930s, and how resolved Lugosi was to stoke his overblown enigmatic allure.

Kino offers a serviceable package for a serviceable early indie horror film. The release is made considerably better by its buried alternate cut "extra," as well as film's interest for zombie diehards eager to bone up on the genre's pre-boilerplate origins.