‘The War Z’ Review: Possibly The Worst Zombie Game Ever Made 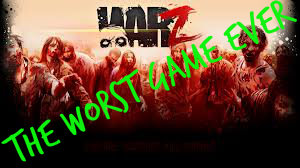 You’ve probably heard about it by now, possibly only in angry whispers from fellow gamers who had been scorned by its disastrous release. The War Z may very well have been the most controversial game of 2012, but it’s also a solid contender for worst game of the year, and that’s pretty damn impressive in a year that brought us XBLA flop Amy, 007 Legends, andanother Naughty Bear game. For the unfamiliar, The War Z is a game that was heavily inspired by DayZ, the Arma II mod created by Dean Hall that’s getting a standalone release sometime later this year. There’s not much else to it. It’s a DayZ clone, and a rushed one at that.

Because I’m a glutton for punishment, I decided to try The War Z out for myself. I tried to reassure myself before I hit that big yellow purchase button on the game’s official website, “it can’t be that bad…” I said. I like the concept, and I’m a full believer that there can be more than one DayZ style game out there. Competition inspires innovation, and all that jazz. If you’re up for it and you have a strong stomach, why don’t you join me on this little adventure? I promise I don’t bite, though I can’t say the same for the undead hordes.