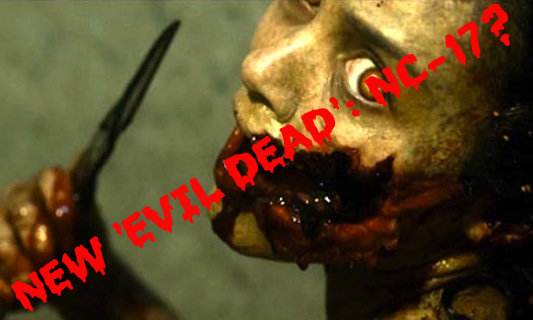 The amount of blood split in the red band trailer for Fede Alvarez’s remake of the Evil Dead should be a good indication of what the rating will be. A very hard R is what Sony Pictures wants, but it looks like they got more than they bargained for as the first cut was given a NC-17 rating by the MPAA.
The level of violence and just general tone of the trailer certainly gave off the hard R vibe, but if the first cut was really NC-17, I’m worried what kinds of cuts will be made to make it that hard R. A lot of what we saw in the latest red band trailer made people believe that this Evil Dead could live up to its predecessors while making their stomach twist in knots. But how much will be cut from it remains to be seen. Let’s just hope it’s not enough to hurt the film.

On the other hand, the NC-17 confirms that this film is everything that we thought it would be and then some. Sam Raimi and Bruce Campbell, who are on board as producers, gave their seal of approval. It also helps that Raimi himself picked Alvarez to direct Evil Dead.

While gushers of blood and extreme cases of fright are a plenty in the red band trailer, the final cut of the film has a lot to live up to if it is being marketed as “The Most Terrifying Film You Will Ever Experience.”