Political Message of the Rising Zombie 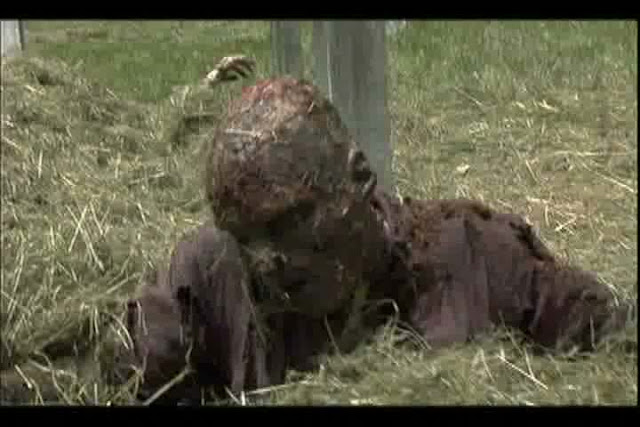 Zombies are in the zeitgeist; they are part of the defining spirit of our society as expressed through culture. Their popularity is soaring.
One reason is the political commentary that has been embedded into many zombie films since 1968 when the anti-establishment director and scriptwriter George Romero reinvented the sub genre. Romero is self-consciously political.
The social messages of a zombie apocalypse generally include: the government is entirely ineffectual or counter-productive; the media is useless; don’t trust the infrastructure; people must defend themselves; cooperation increases the chance of survival; and, the inability to cooperate is a fatal human flaw. It is a nihilistic, anti-establishment, cynical commentary with flashes of heroism and humanity set against a background of violence.
The zombies themselves are another message. The walking dead are metaphors for the American public which is programmed for deadness to everything but consumerism. The 1983 study Midnight Movies called Romero’s most famous movie “the most literal possible depiction of America devouring itself.” The ‘living’ are prey for the zombie public, and they must scramble to avoid becoming zombies as well. The Romero movies repeat the sentiment: “We are them, they are us.”
Zombie apocalypses are the ultimate portrayal of the masses rising up to annihilate the status quo. Alas, the masses remain unthinking and dead. In their rising, they make no distinction between the innocent and the guilty. They simply overwhelm and consume until the old reality is no more.
Marxists understand the analogy and its power but they over complicate the message by burdening it with unrelated doctrines such as the labor theory of value.Anti-consumerism is mistaken for anti-capitalism because the two terms are conflated. No distinction is made between crony or state capitalism and free market capitalism.
Claiming the zombie phenomenon is politically astute, however. The emotions evoked by art can reach where arguments and evidence cannot. Anyone who has been captivated by Rand knows that.
Statists sense the raw power of culture. The Nazi leader Hermann Goering is famously quoted as saying, “Whenever I hear the word ‘culture’, I reach for my gun.” Culture – as opposed to propaganda – is a free market, decentralized expression of people’s values and attitudes. Like thought itself, culture cannot be controlled by law or created through oppression. The state tries to stamp out whatever is too openly subversive but the attempt is like whack-a-mole; the harder they pound, the more of it pops up.
Marxist theorists are smarter. They reinterpret the art and, so, make it serve their political purposes.
THE MARXIST MESSAGE
In an article entitled “We the Living Dead: the convoluted politics of zombie cinema” (Reason, January 25, 2007), libertarian Tim Cavanaugh points to the 1979 study The American Nightmare: Essays on the Horror Film by Robin Wood. Wood described the cannibalism of zombies as “the ultimate in possessiveness…the logical end of human relations under capitalism.”
Cameron M. Weed’s thesis, “The zombie manifesto: the Marxist revolutions in George A. Romero’s Land of the Dead,” is typical of Marxist analysis. “[O]ne must view the films as an allegory for the class antagonism and revolution proposed by Karl Marx in The Communist Manifesto. This thesis will analyze the representational fluidity of the zombie…through two distinct Marxist lenses — the proletariat revolt against the bourgeoisie and the bourgeoisie revolt against the monarchy — while also exploring the implications of the representationally transferable zombie to the overall meaning of Romero’s long-gestating Marxist narrative.”

THE REAL MESSAGES
Romero did not invent zombies but he did lift them out of the merely horrifying and into the also politically relevant. He created the American zombie. His apocalyptic movies combine stark social commentary with appropriately cold shudders.
His message is not leftist but anti-authoritarian and a jarring cry out against the dehumanization of society through programming.
Consider a brief analysis of the movie that started it all: Night of the Living Dead(1968). Seven average people are trapped in a farmhouse with useless media info, no help from authority, and surrounded by mindless masses. The characters die to literally feed the rampaging zombies who are also average Americans. Why have the latter transformed into zombies? A casual theory of radiation is floated. But, ultimately, their brain-dead hunger is merely presented as a reality. It is also the portrayal of a political nightmare.
The movie was produced at the peak of the Vietnam War and in the wake of the assassinations of John F. Kennedy and Martin Luther King. A traumatized and disillusioned America was in the throes of a cultural revolution with the young railing against their parents’ consumerism; America struggled with simmering warfare between the races; it watched the senseless violence of Vietnam every evening on the news.
Romero’s classic opens with a shot of an American flag trembling in the wind from a cemetery. It reaffirms a status quo in which chaotic violence suddenly and irrevocably bursts like a dam. Night immediately breaks stereotypes; for example, a black man is the hero in an otherwise all-white cast. After an epic battle for survival, he dies from a gunshot delivered by white ‘redneck’ types who mistake him for a zombie. Over and over, stereotypes are both broken and bitterly reinforced. The ultimate message: authority and mass mentality are the enemies. But the world has gone so far off a cliff that independent thought and action do not guarantee salvation.
In Dawn of the Dead (1978), Romero’s survivors retreat to a mall as a stronghold with needed supplies. This is his most explicit assault on mindless, modern consumerism. A main character explains why the zombies are thronged at the mall’s glass doors. He says, “Instinct. Memory. It’s something they used to do. It was an important place in their lives.” In short, the walking dead are doing the same thing as they did as the walking living. This glimpse of voracious humanity is all the more horrifying because it contains truth. The movie’s ultimate clash, however, is between two gangs of humans and it leads to a lethal assault by opportunistic zombies.
In Day of the Dead (1985) survivors are stranded in an underground bunker. They consists of military, scientists and support civilians. This is Romero’s commentary on the conflict between militarism and science, and the inability of both to address social reality; it is also the conflict of militarism and science against the average person as expressed either through zombies or the civilians. The scientists themselves battle over the purpose of research on zombies. Ultimately, a suicidal member brings disaster into the bunker when he opens a platform door to the outside.
In Land of the Dead (2005), the survivors live in a city bounded by water and electric fences. This is Romero’s analysis of class conflict. Among the living, a sharp distinction exists between elites who live in a luxury high rise and prols who exist on the streets and maraud surrounding areas for supplies. Between the living and the dead, zombies come across as an oppressed class that is evolving its own consciousness. In several scenes, Romero openly sympathizes with the dead who eventually occupy the city.
CONCLUSION
Romero is one of the most chilling critics of American culture and politics. Those who see only gore and senseless violence in his work do not altogether miss his themes. The gore of America – both psychological and actual – is a core aspect of Romero’s message.
As the narrative arc of his four zombie movies progresses, the line between the living and the dead begins to blur. At one point in Land of the Dead, a character declares of the zombies, “They’re pretending to be alive.” The hero replies, “Isn’t that what we’re doing? Pretending to be alive?”
The arc of Romero’s zombie apocalypse begins with the living visiting the dead in a cemetery. It ends with the few who are still alive fleeing from an awakened zombie mob that captures a city for its home. Here Romero’s nihilism is at its deepest. The ancien regime has been swept away; another form of human order has risen from chaos and ashes. Will it fare better? Can it do worse?