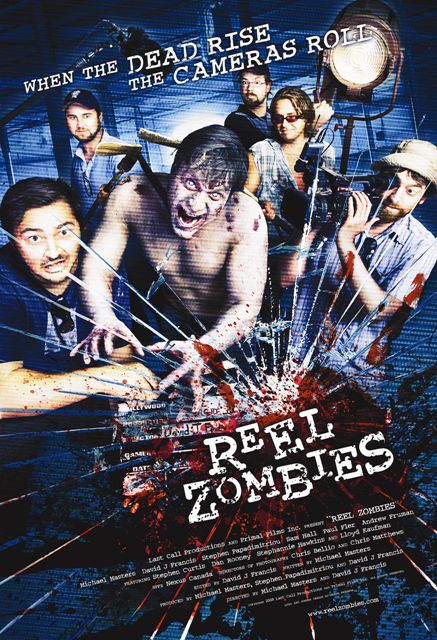 Directors: David J. Francis, Mike Masters
Writer: Mike Masters
Synopsis: Independent Zombie Film makers, Producer Mike Masters and Director David J. Francis, the team behind the commercially unsuccessful Zombie Night 1 and 2, have found the climate for Zombie movies has changed significantly after the "real" zombie invasion begins. Hedging on the fact that the Zombie mayhem that has taken a grip on the nation is only a temporary problem, the film makers realize that once normalcy has returned, demand for Zombie product (now outlawed) will be at an all time high. The filmmakers seize an opportunity to do something they were never able to before on their meager budgets, make a memorable zombie film. This time, however, through using real zombies, the film will have an authenticity and production value previously unattainable. Will they finish the film and get their long deserved accolades as pioneers in the Zombie film industry, or will the making of documentary be all that's left of their attempts to bring something innovative, fresh and devastatingly real to the screen?

REEL ZOMBIES If you ask me to describe REEL ZOMBIES in one word, I would say : Brilliant, Funny, Innovative, Unexpected, and Addictive. Ok that's more than one word. But that's what REEL ZOMBIES is. More than what you can expect. Let's face it. David J.Francis and his team made two of the worst Zombie Movie ever in the opinion of many Zombie Movie Lovers. I am one of the rare Zombie-Addicted who truly enjoy those movies that are Zombie Night (2003) and Zombie Night 2 : Awakening (2006). So what is it about REEL ZOMBIES that makes it so great in my opinion ? It's the originality.

Plot : During a real Zombie plague, the original team that brought Zombie Night sees the incredible chance to make the most realistic Zombie movie ever by casting real zombies on the screen ! Which should erase the bad reputation that Zombie Night got 'em, and finally, bring 'em recognition and even maybe, make 'em win an oscar! Casting Real Zombies has many positive situations (Saving on makeups, actor salary, etc.) but also have negative ones (team crew that got bit and, forced to becomes Zombie actors, or worst, getting eaten entirely). With everything going wrong, David J. Francis' Team will do anything to finish the movie. Filmed like a Making-Of, REEL ZOMBIES is truly funny due, mainly, to the great mood the whole team brings. David J, Francis (Director), Mike Masters (Writer), Stephen Papadimitriou (Producer) and others, are playing themselves to bring such a "Reality-Style" feeling to the movie. All the characters are simply lovely. I was glad to see the return of Steve Curtis (from ZN and ZN2). What is also stunning is how they manage to show us how a professional movie crew has to work with very limited budgets. It makes us appreciate all the passion and efforts those guys are putting to bring a movie to term. When I say addictive, it's because I am the guy that when I like a movie, I can watch it many times in a short period. I went to see Lord Of The Rings 6 times before they got it on DVD. So if you are like me, when you'll see REEL ZOMBIES you will cringe because after getting out of the cinema, you will have to wait to see it on DVD as it is not presented in many theaters, so far. So if you have the chance to see it "Live" ... GO FOR IT !!! I had the chance to see it at the Fantasia Film Festival in Montreal and the crowd totally loved it !!! People cheered at it and applause when there were headshots or crew members getting killed. Or when they delivered a great line. It was such a great experience. It's a mix of "Shaun Of The Dead" and "[Rec]" or "Zombie Diaries". I just can't wait to watch it again on DVD with my friends. There are some great Canadian Zombie Movies made so far. I can think of Bob Clark and Alan Ormsby's "Deathdream", or Andrew Currie's "Fido". Now with REEL ZOMBIES, David J. Francis' team can proudly hold Canada's Zombie Movie torch very high. Hope they are going to make more Zombie Movies, as they are clearly in the right direction. And to all the ones that hated Zombie Night and live to bash on REEL ZOMBIES, it's too bad for you because this time, you won't be able to do so without losing some credibility. It's just simply a great Zombie Movie. Period. 8/10 ~Zombi God.