George Romero Opens Up About Barbra, Stephen King, And The Hollywood Conspiracy 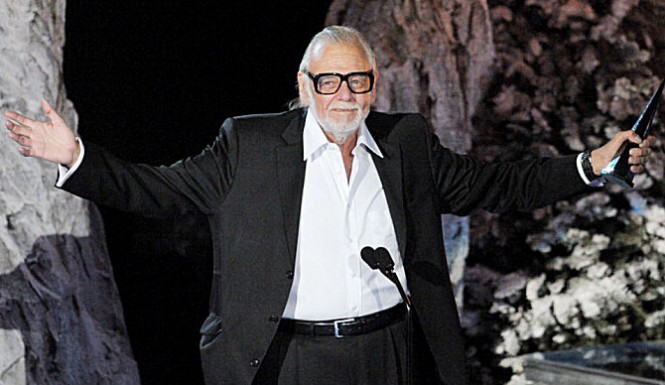 George Romero recently opened himself up to fans at a Wizard World Comic Con and talked about the problems that have sent Romero backing away from his film projects and ultimately led to George’s success with comic books and graphic novels.
A portion of the Q&A with Mr. Romero was dedicated to past projects and George ultimately found himself discussing one of his least liked characters with his fans.
“I apologize to women for Barbra in the original Night of the Living Dead, a totally ineffective character… She was running around, her heel snaps off, she falls down. She is completely ineffective, then she goes catatonic, and that’s about it for her. So I apologize for that. When I wrote the remake Tom Savini directed, I made Barbra strong.”
As interest in discussing Barbra waned as easily as the character herself does in the films, George revealed that another one of his films, Day of the Dead, will soon be celebrating its 30th anniversary. Romero recalls that Day of the Dead received mostly negative reviews, but, as time wore on and fans clamored for more of Romero’s style of zombie films, even the critics softened and revisited George’s classics with renewed interest.
“I guess my stuff needs to grow on people. Too bad! That seems to happen with all of it…There is something about the sameness people like. And what I’ve tried to do with all the zombie films is purposely make them different. That may be part of why it takes so long for people to see what it’s intended to be.”
Ultimately, fans wanted to know why they haven’t seen anything new from George Romero, but, surprisingly, it’s not because Mr. Romero hasn’t had anything new to offer. In fact, George has been pitching scripts based on Stephen King works, but even with the duo working in tandem, no one in Hollywood seems interested in their projects.

“My zombie films were all sort of satirical, with political messages. So I was doing them inexpensively and quietly off in left field somewhere. All of a sudden, along came Brad Pitt. Now Hollywood thinks you can’t make any money on a zombie film unless you spend $200 million to shoot it. So I just took a break and decided to do this Empire of the Dead instead as a comic series. There are zombies in it, but there are zombies and vampires. I’ve been doing it almost two years, and took a break from film stuff...”
“…we haven’t been able to sell ‘The Girl Who Loved Tom Gordon’ to anybody. I have been working on that, and recently wrote another draft of that, but nobody wants to do that. We can’t get anyone interested. That and ‘Gerald’s Game.’ Those are the two I was interested in, but we can’t get anyone.”
Romero blames the disinterest in his projects on the fact that they are anthologies and, at the moment, Hollywood is primarily interested in franchises, or stand-alone stories that can be developed into franchises.
Finally, George touched more on his comic books and the upcoming television adaptation of one of his series. While there may not be any new Romero zombie films headed our way, George stated that he will be bringing Empire of the Dead to the small screen.
“Well, I think I’ll hopefully be directing a couple of them. First of all, it has to get made. All we have is a deal to write it and pre-produce it. We don’t have a production deal yet, but our fingers are crossed and it looks good. So we’ll see. But I hope to direct a couple, and I’m writing the pilot, and probably at least most of the first season if it flies.”