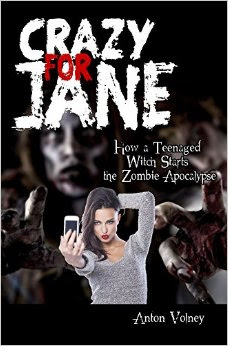 Midas Touch Writer LLC just released a new zombie thriller novel on Amazon.com called Crazy for Jane. The story follows Jane, a teenaged witch who accidentally starts a zombie apocalypse after releasing a video love spell that goes viral. The spell makes millions of people obsessed with her to the point of madness, until they just crave flesh and become zombies. This is a totally fresh take on the zombie genre, with the epidemic being caused by a mix of technology and magic.
On the surface, the story is a gory, graphic, action-packed and wildly entertaining plot to save the human race; however, this book mixes themes like feminism, gender equality, sexual orientation and equal rights for everyone. The only way to save humanity will be to end discrimination and prejudice, and the use of zombies become a metaphor for the injustices in the world today.
Crazy for Jane also takes the time to explore the harsh beauty standards that are thrust upon women. Jane is obsessed with her good looks, and resorts to magic to maintain them. Abby, a lesbian supporting character, is bullied for being short, overweight and having acne. Both characters must come to terms with their body images by the end of the book. Common sexist tropes are challenged. For example, the common damsel in distress trope is turned on it's head by the end of the book. Also, the debasing term 'slut' is directly challenged in an epic final speech, the likes of which have not been seen since John Galt in Atlas Shrugged.
Overall, Crazy for Jane grips the reader and it never lets go. People everywhere will appreciate the gritty zombie thrills, and a gentle appeal for feminism from a series of very likable characters. Women everywhere will appreciate the strong female characters who reflect everyday female struggles that male-focused Hollywood movies typically ignore. Feminists will especially enjoy the book, as it speaks for their agenda, and is also very entertaining. This story even comes with an over the top bra burning zombie fight scene. As with many books and movies in the zombie genre, Crazy for Jane goes heavy on blood and gore. Zombie lovers may find the graphic scenes very satisfying; others may lose their lunch.