Move Over, ‘The Walking Dead': ‘Game Of Thrones’ Wins At Zombies 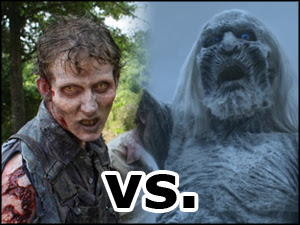 When you play the game of thrones, you win or you die. But when “Game of Thrones” plays the game of zombies, it just wins. It wins everything.
Sunday’s (May 31) episode “Hardhome” made it clear just what all those ominous threats of coming winter actually mean in Westeros: Not a few months of cold weather and snow flurries, but an invasion from the North by a hungry pack of wights (the “Game of Thrones” version of zombies) and the White Walkers who command them.
Jon Snow and the Wildling encampment were treated to a preview of the carnage to come when a horde of the undead descended upon them. And we, the audience, were treated to a zombie spectacle that’s better than any other currently on TV, including the critically-acclaimed “The Walking Dead.” How did that happen? We round up the six ways that “Game of Thrones” wins at zombie war.