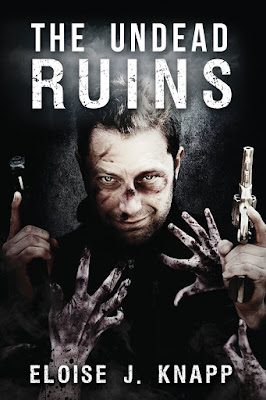 The Undead Ruins doesn’t pick up immediately after the second book in the trilogy, The Undead Haze, but about a decade after the start of the zombie apocalypse and years after Cyrus reconnected with Blaze near the end of the previous book.  They have spent the past few years working for the leader of three rebuilt towns as mercenaries for hire, doing the tough jobs no one else wants, including executing those who have disobeyed the laws about hiding undead family members.  As has always been the case, Blaze and Cyrus are aloof, not befriending many of the people they now interact with except for a select few that have a military background like Blaze.  She still has every intention of finding her lost brother, the brother that Cyrus knows about and has kept secrets about since the events that took place in the prior novel.  That isn’t the only secret he’s keeping from Blaze-secrets if revealed might mean his death at the hands of his closest companion.
At the start of this trilogy, Cyrus V. Sinclair proclaimed himself a sociopath.  Much of the frustration with the author from the bulk of reviews I have seen have been with this proclamation.  Either he is not a textbook definition of a sociopath or he softens in the second book to the point where even Cyrus is no longer sure what he is anymore.  Whatever he truly is, since all three of these books were written in first person, we have only the narcissistic and egotistical Cyrus to rely on for his diagnosis.  It would be fair to say that Cyrus liked the idea of being a sociopath and indeed has some of those tendencies, though even he had to acknowledge he has transformed into something else by the time the events of this book take place.  Blaze, Cyrus’s companion and sometimes nemesis, is perhaps closer in definition to a sociopath, although the love she shows for her brother puts a chink in her armor with that designation. More important, Blaze would be unlikely to care what someone labels her.  She is what the world has made her.
Things start out fairly calm at the beginning of this book, with Blaze and Cyrus dealing with grunt work no one else wants to do.  They aren’t necessarily popular with most of the town folk due to the roles they take on, but they are needed and appreciated by the leadership.  Unfortunately, with an attack on one of the towns, there are hints that the crazies they thought had faded into history have returned, stronger than ever and with a new and even more vicious leader.  With this new turmoil comes the possibility that the lies that Cyrus has been telling Blaze to keep the peace between them will be revealed.
It is interesting how the voice of Cyrus has changed during the course of these books.  A smug, unrepentant loner when we first meet him, he still remains aloof but has transformed in many ways.  He still loathes cowardice and weakness, but has gained a respect for those who fight to survive and the necessity of civilization, even if aspects of it make him nauseous.  The relationship between him and Blaze has gotten more complicated.  They are not lovers, but soldiers who have been through wars together.  They would fight and die for one another but at the same time it seems clear that one would kill the other if it suited their needs.
Overall, this has been an entertaining trilogy.  The main character made a proclamation about himself early on that does not play out as he expected.  If it had, this story would have run the risk of predictability.  A criticism I had for the first book came back to haunt this one when the author slips away from first person for a brief moment-a chapter-near the end of the novel.  It could be argued in both cases of the necessity of these diversions although I believe that the author could have found a way to keep on telling the story from Cyrus’ perspective and gotten the same point across.  I had few other quibbles when it came to the writing itself.  It was interesting that here in the third book about Cyrus that the story is as much about someone else, Blaze, as it was about him.  It added depth to the tale and made their relationship that much more compelling.

This and more can be found at Patrick's website Tomes of Darkness!