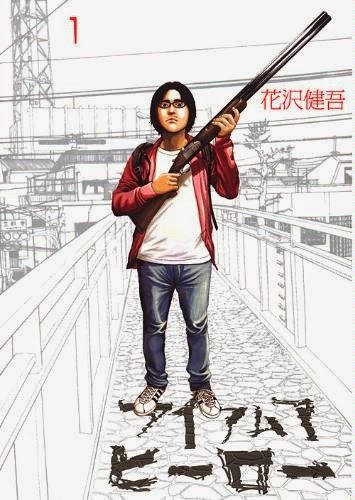 It is officially announced today that a live-action adaptation film of Kengo Hanazawa's survival zombie manga I am a Hero is in the works for a 2015 release. The manga has been serialized in Shogakukan's Big Comic Spirits since 2009. It has reached 4 million print run and the latest/15th tankobon is scheduled to be released in Japan on June 30. The story is set in a modern-day Japan attacked by an infectious disease which turns people into carnivorous ghouls called "ZQN."

41-year-old actor You Oizumi plays the protagonist Hideo Suzuki who works as a manga assistant. Luckily for him, he has a shotgun for clay target shooting which helps him to survive the apocalyptic situation. Oizumi is known as Nezumi Otoko in the live-action adaptation films of Shigeru Mizuki's horror manga GeGeGe no Kitaro, and also voiced in several anime films including Studio Ghibli's Spirited Away (2001), The Cat Returns (2002), and Howl's Moving Castle (2004). 21-year-old actress Kazumi Arimura, who will voice the protagonist character Marnie in Studio Ghibli's 2014 summer film When Marnie Was There, will join the cast as a high school girl Hiromi Hayakari, with 26-year-old Masami Nagasawa as a nurse named Yabu.

The shooting began in early June and will finish in August.