Miami Lawmaker Wants to Protect Floridians Against a Zombie Apocalypse 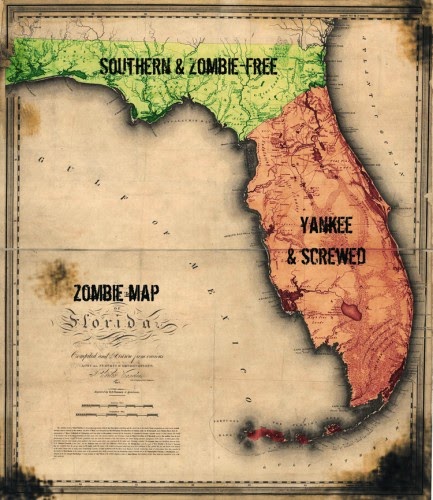 The Florida senate is considering bill SB296 that would make it legal to carry a gun — even without a concealed weapon license — during a time of civil unrest, such as a hurricane or other state of emergency. It’s an absurd bill, and one Miami senator has responded to it by taking that absurdity to its illogical conclusion. Sen. Dwight Bullard (D-Miami) has submitted an amendment to the noxious bill that would allow Floridians to carry guns during an inevitable zombie apocalypse.

Note to Floridians: aim for the head.

The Florida Senate didn’t take up the bill yesterday and time is running out to have Floridians running around with guns during times of great stress and civil upheaval to have legal cover for standing their ground against unarmed black teenagers.

Perhaps Bullard’s amendment brought to light the absurdity of the bill, and Florida’s elected senators are reconsidering the image of shoot-outs over the last loaf of bread at the local Piggly Wiggly as Hurricane X is bearing down on the coast. But maybe, more likely, the Republican-dominated Florida Senate is seriously deliberating the wisdom of passing the bill with the zombie apocalypse amendment — just in case.