“On the Brain” zombie film has familiar look 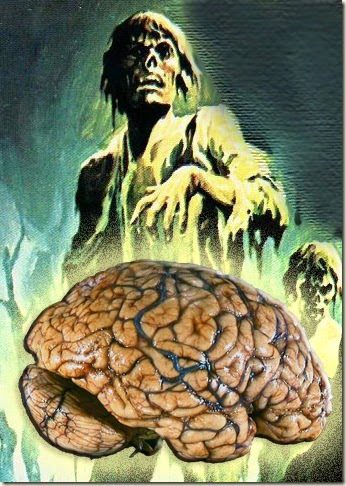 Aiming to avoid $500-a day film fees in the Los Angeles area, Kevin Stevenson looked Inland scouting locations from Barstow to Blythe for his directorial debut “On the Brain” feature film and found San Jacinto.
The cast and crew of up to 40 have discovered a variety of locations for the zombie film with an “infection” twist as publicist Zenaida Gorbea describes it. Of course, the ending can’t be revealed before the film’s hoped for film festival debut.
On a recent day, they used a frozen-in-time vintage, parked GMC 4000 pickup at the historic Quandt Ranch off State Street for a scene where zombie Zeke, played by Frankie Ray, is breaking glass to get to Louise, played by Cynthia “Cyn” Dane.
“He is the husband and he has already ‘turned’ and he is trying to eat her,” Gorbea said of the scene. She is trying to get him to “snap out of it.”
Eucalyptus branches from a nearby tree come in handy to try to deflect windshield glare from the truck in a dry grassy field.
There are frequent breaks to review film footage. Dane casually holds a cook’s knife coated in fake stage blood. On a nearby makeup table one container is labeled “sweat.”
During one break, Danica Rodriguez, key makeup artist, uses eye drops to remove a fleck of glass from Ray’s special colored contact lenses, which give him a ghastly look and sight from only one eye.
Nearby, Ray’s white fluffy pooch, with a shock of magenta-dyed fur, is off set visiting for the day.
San Jacinto recently debuted a film location website to show the industry what the city has to offer, but in this case, Stevenson learned of the city through the Inland Empire Film Commission.
Earlier this year, City Development Director Sharon Paisley took Stevenson on a locations tour around the area. “She is really, really helpful, setting us up for success,” he said.
The crew took over Patsy’s Country Kitchen restaurant at Ramona Expressway and State Street after closing the Saturday of Easter weekend. “When we were filming at Patsy’s, people kept coming asking if we were open,” Stevenson said.
Restaurant owner Karri Jones, who also provided food for the crew, said, “they had to unplug the phone number because the phone was ringing off the hook.” She already had planned to be closed on Easter so filming continued.
At the city’s Francisco Estudillo Heritage Park, the city museum and historic Estudillo Mansion interior became filming backdrops.
“The bathroom became the jail” in the museum, said Lynn Peterson, the city’s liaison for the property. “They used a lot of props in the museum.” Filming occurred on days the city property was closed to the public, but volunteers were onsite to assist as needed.
The crew also filmed at the Hacienda Motel, a Ramona Boulevard convenience store and a barn in San Jacinto.