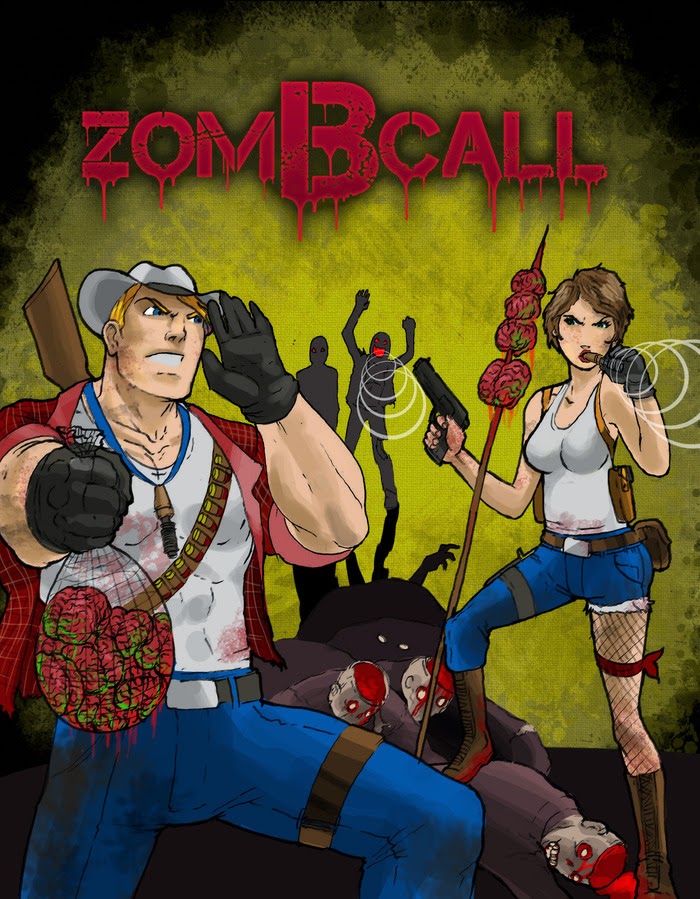 ZomBcall - For anyone who wants to seriously sound like a zombie!

ZomBcall is the most innovative zombie product to come along in years!
Whether you’re a fan of zombies and love zombie movies and books or you’re more of a hardcore zombie enthusiast and want to add to your zombie apocalypse survival kit, zomBcall is the perfect gift for anyone who’s into zombies.
This is our fully functioning prototype zomBcall zombie vocalizer!

NOTE: zomBcall will be colored in zombie green with a red logo.  The snorkel will be black.

The innovative snorkel is part of the magic that allows the user to "play" zomBcall like a musical instrument to create a virtually limitless number of zombie sounds!  By manipulating the snorkel as well as using various breath techniques, everything from growls, groans and moans to screeches, screams and squeals can be created. We will continue to post new VIDEO demos of techniques below!

It’s the perfect companion for the adventurer looking to go on a mission to hunt zombies or perhaps you’re part of a zombie horde and want to call your zombie comrades in for “dinner”, zomBcall is the perfect weapon or tool for the job!

Let’s get to the point: a zombie apocalypse is going to happen, it’s inevitable…it’s just a matter of when…
ZomBcall is a zombie attraction device – it mimics those scary & grotesque zombie sounds we’ve all heard in movies and hit TV shows like The Walking Dead. ZomBcall gives you the ability to control where zombies go… Will you be prepared when the zombie apocalypse goes down?

Be prepared with zomBcall!  Because if you're not prepared... you're not gonna make it!

ZomBcall development has been in the works for over a year now. Our goal was to engineer a device that would be capable of producing a wide variety of zombie like sounds. We definitely achieved that goal and now we need to get these into the hands of all humanity!
Here are our very first sketches of the zomBcall design:


We have been working with Dano Pinkham for the last year designing, developing and testing zomBcall. Dano owns one of the leading and oldest animal call companies in the United States. Dano designs and manufactures game calls and components for over 100 companies! He’s the real deal. And he’s right here in the USA.
That means zomBcall will be made right here in the USA!
The very first time we saw the first prototype was over Skype. Here is a screenshot Christopher took to mark the occasion. Dano is holding the same prototype that we used in the video!

ZomBcall is much like a musical instrument, where you have the ability to “play” the zomBcall and the capability of producing your own array of custom zombie sounds. The more you experiment using the zomBcall, the more sounds you will discover and the more masterful you will become. Please help us reach our zomBcall financial goal and let’s virally spread tons of fear and fun to anyone who loves zombies!
We had a lot of fun producing our video with the help of an awesome group of volunteers!  What an amazing group of talented people!  In the grueling Texas heat we all spent an entire day filming in the woods!

Well, we, like you.. LOVE ZOMBIES!  That should be enough.. but there's more!

Christopher works late every night at his multiple computer array so much that he often resembles a zombie in the morning!
James is a co-owner in the country’s largest 5k zombie obstacle races called, “The Zombie Race”.
Since 2012, James and his zombie race business partners have traveled throughout the United States entertaining many thousands of people with these incredibly fun and adrenaline fueled events.
During each event, James has spoken with many hundreds of the diehard zombie fans about the zomBcall, and inquisitively asked each of these fellow zombie enthusiasts if zomBcall would be a product that they would actually purchase for themselves or as a gift for someone else…the answer across the board, was always a resounding YES!
In fact, whenever James brought the concept for the zomBcall up during one of his zombie events, people not only wouldn’t stop talking about it during the course of that event, but many of those same people took the time and sought James out through email and on social media, just to see when zomBcall would become available for them to purchase! For James & Christopher, this was a sign that they needed to pursue their passion…

This is when James and Christopher made up their minds to move ahead and raise the necessary money that would allow them to get these into the hands of zombie fans everywhere!

In addition we have created artwork for the first official zomBcall t-shirt! The design will be silkscreened on front of black t-shirts with the red zomBcall logo on the back. So the zombie will be "ripping out of your chest"! COOL, HUH!

We have already made an agreement with Robbie Weinberg of Witson Wells PMG to print the shirts. Rob is the genius behind several highly successful businesses including Focket and MVPee. He pioneered a unique compressed packaging technique and has made and packaged t-shirts for huge companies including Coors and Lowes just to name a few.

“As zombie enthusiasts, we are honored to have this opportunity to produce a zombie product that zombie fans can really have some fun with. Not often do you have the chance to invent a zombie product that zombie fans can actually put to use. It’s just awesome to see how many people are totally amped about the chance to get their hands on their very own zomBcall. It’s awesome and we are truly grateful for your support!”

KICKSTARTER WE NEED YOUR HELP!  PLEASE BACK ZOMBCALL!

ZomBcall is made in the USA, so production will be under our control and zomBcall devices will be manufactured from our trusted and seasoned call manufacturer, based in Tennessee.

This means that the quality of zomBcall is top notch and the delivery of zomBcall will be on time.
Our shirts will be made by Robert Weinberg, who has supplied huge companies with top quality t-shirts for many years. We are totally confident in Rob to deliver top notch zomBcall shirts!

For questions or to make a pledge, click here!