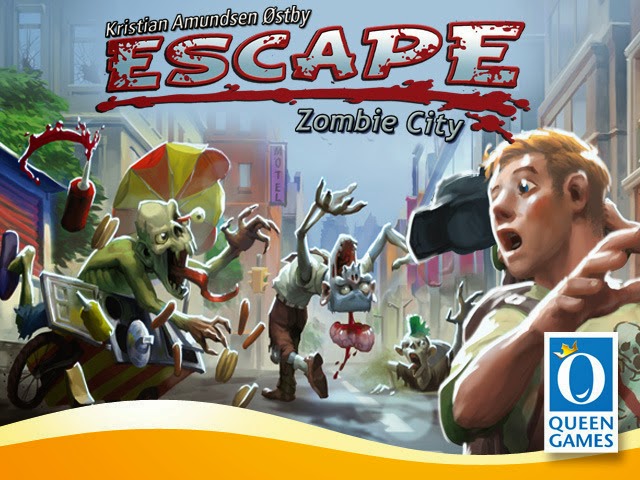 Run for your lives! The zombies are coming in this brand new Kickstarter Special:"Escape: Zombie City".

All the fun of Escape, now with zombies! Escape: Zombie City is a real-time board game, where 2-4 players take their turns simultaneously by rolling their 5 dice as fast and as often as they can without waiting for their teammates. The game plays in 15 min.
With the town created from randomly drawn street tiles, scenarios played from shuffled card sets, and zombies roaming the streets, Escape: Zombie City is always different - making for a fast and furious game experience every time! Coordinate your actions and help each other, because your only chance for survival against the zombies and escaping zombie city is by working as a team.
The video below focuses on the game components and rules for  Escape: Zombie City.
The game is played in two phases. During the first phase players gather items and find the exit. The second phase is escape by van, when players work to escape the city.
Item types that can be collected are Tools, Meds and Supplies, such as gas, first aid kit and food. The items are separated into 3 stacks based on the icon shown on the back of each tile. There are three different items in each category.
Players move around the board by rolling their 5 dice continuously. In the process players will reveal new areas of the city (by exploring new tiles), collect items (by visiting special buildings and rolling the required icons), and fighting zombies (by bringing the pain!). All players are rolling at the same time. There is no turn order in this game.
There are 5 start tiles always set up at the beginning of the game; the church, the van, the grave yard and 2 street tiles. Additional Street tiles are revealed from the stack when a player rolls 2 runners. Street tiles are placed with the skull icon pointing towards the tile your pawn is currently standing on
What about the ZOMBIES you say! There are 3 levels of zombies to fight easily recognized by the color of their backgrounds. Green is the easiest, Yellow is moderate, and Red is the toughest. You will probably need help from your fellow players to fight the red zombies, but they can only help you if they are on the same tile with you.
Every time a new street tile is reveled a zombie card is drawn. Zombie cards can do several things; move zombies already on the board 1or 2 tiles, spawn new zombies or both!
Provided a zombie has not made it to the church tile. Once all needed items are collected and the exit tile has been found all players hurry back to the church where everyone's pawn is replaced with the single van pawn. All players are still rolling their own dice, but from here on all players decide collectively how to move the van out of town. And there still could be ZOMBIES to fight along the way.
What comes in the More Zombies module?
The More Zombies module has the Leech (a red Zombie that requires 4 fists to defeat and prevents players from leaving that tile until it is defeated), the Runner (a zombie that requires 3 fists or bats to defeat and moves on any color trigger), the Robust One(a zombie that requires the player to have a specific piece of equipment in his/her backpack in order to defeat it...good luck with this one), the Teleporter (when a player flips up a tile with the teleporter's color, the teleporter zombie immediately moves to that player's location and the player must immediately fight the teleporter), the Queen(this zombie spawns new zombies when activated. Players cannot fight her...effectively she creates a new spawning point), the Scrap Yard (a street tile that allows you to place one random supply of your choice (tools, supplies or meds) on it at the end of each countdown, the Radio Tower (a street tile that when activated draws zombies to it rather than the church).

This red "boss" zombie requires 7 fists rather than the usual 5.

The Crossbow can be found at the Gas Station and counts as a fist or a bat whenever you fight a zombie.

The Shack street tile serves as a safe haven for one player (so he/she does not have to return to the church).
The Map can be found at the Hospital and allows a player to move to any tile with two runner icons (even traveling through buildings to get there).
Players can use their calm faces when zombies are on the same tile as the player.
This yellow zombie requires 3 bats and 3 fists to be defeated.
There is one backpack available at each special location (Gas Station, Hospital and Supermarket) and the backpack allows you to carry two more items.
Go to the supermarket and roll 7 fists. This must be accomplished before players can leave the town (need to have the latest issues to read on the road!)

Risks and challengesLearn about accountability on Kickstarter

Escape: Zombie City is our first game to expand the Escape universe with a new theme and changed game play mechanics but still staying true to the frantic fun of Escape: The curse of the temple. We are proud to present it here as a Kickstarter Special!
Our toughest challenge with our previous projects has involved the coordination of production when a game is made with components from different manufacturers. This creates some logistics and shipping challenges that we want to improve upon. Going forward our plan is to minimize this situation so that we can better manage our production timeline and delivery. In the case of Escape: Zombie City, we have the component specifications and resources in place, so we are very excited about the expected turn around time for this project.
Tortuga, Greed and Fresco Big Box have arrived in the US, and will start delivering those games shortly. In the EU we shipped the games already to the backers.
Kingdom Builder Big Box is also proceeding according to schedule.
Due to shipping time (ocean transit, customs, rail/truck, and final delivery), our release policy for Kickstarter Analog Games releases is that they will be released in the EU when they are available since we produce in Holland. North America will be 6-8 weeks after that and for backers everywhere else it will be 8-10 weeks from the EU launch.
For any customer service questions (kickstarter or others) please
email: kickstartercs@queen-games.de.