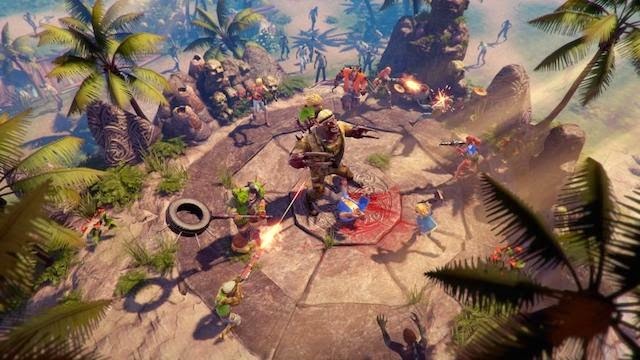 The only thing better than a Sharknado is, of course, a Sharknado that dispatches the undead horde. Which is precisely the type of batshit craziness you can expect to find in Deep Silver's upcoming ZOMBA (Zombie Online Multiplayer Battle Arena) title Dead Island: Epidemic. A new wonderfully charming trailer has hit the net explaining the ins and outs of zombie survival.


"Dead Island: Epidemic pits three teams of players against each other in a desperate fight for survival. Dead Island: Epidemic is a Free-to-Play PC title that features all the trademark zombie-slaughtering elements that are hallmark of any Dead Islandexperience." The game is currently in a closed beta, but players who want to get in on the action can head over to playdie.net and purchase one of the three digital Early Access starter packs.
If the Dead Island games thus far have been average gameplay experiences, they've certainly been among some of the finest video game advertising to date. I still listen to the music used for the first Dead Island trailer, a short film so good it was optioned for a film right then and there. Sadly, like many trailers, the game did not live up to its promise; in the game's defense, after that trailer, what possibly could?
The Dead Island: Epidemic trailer is heavy on gameplay and cheeky dialogue. Deep Silver clearly wants you to have fun while watching so you can have fun while playing, too. The trailer features a Fire Fire-Axe, a fire axe that is also on fire. The game boasts a seemingly endless amount of weapon customizations, with nearly every item you find customizable with every other weapon. Paint roller and spikes? You got it! Trumpet flamethrower? Of course it's there. Why wouldn't it be?
The game strips away the old fashioned point and clicking and adopts the classic WASD keypad, making it easier "to hop in, no muss, no fuss." Different modes will put teams against one another as well as the zombie horde in a desperate attempt to secure resources, capture points or simply kill as many walking things as possible.
Watch the trailer below and get pumped for some wild, zombie apocalypse action as only Dead Island can deliver.