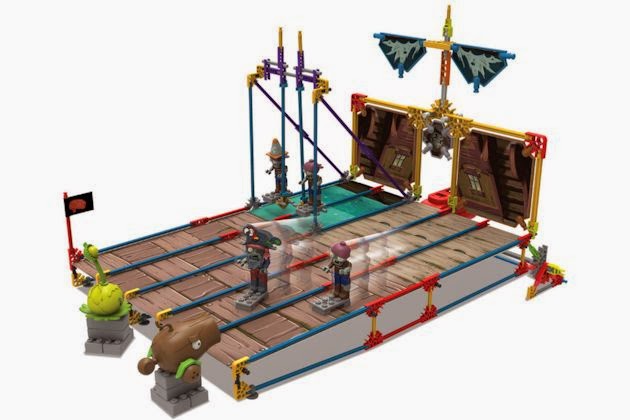 Construction toy maker K’nex is teaming with PopCap Games, creators of Plants Vs. Zombies, to bring the garden-based tower-defense game to your living room table with buildable play-sets and figures from the series.

Seven play-sets are currently available on the K’nex site. Two small sets, the Pirate Ship Building Set and the Wall-nut Bowling Building set, are priced at $11.99, and each include a small, buildable set, one zombie figure and one plant figure. At $16.99, the Cone Mech set and Football Mech sets will include a Future Zombie figure as well as a buildable, motorized walking mech. At $29.99, the Wild West Skirmish Building Set allows players to build the entire Wild West level from Plants Vs. Zombies 2, and includes 2 Cowboy Zombies, a Prospector Zombie and a firing Peashooter figure. Also for $29.99, the Jetpack Zombie Attack Building Set presents the Far Future level from PvZ 2, and includes a Jetpack Zombie, a Future Zombie, a Future Conehead Zombie and a Laserbean figure that shoots when flicked from behind.

For those looking to spend a little more on their plastic Plants Vs. Zombies fun, the $49.99 Pirate Seas Plank Walk Building Set includes a motorized treadmill system that moves a Pirate Zombie, a Pirate Conehead Zombie and a Pirate Captain Zombie forward, just like in the game. A Firing Coconut Cannon and launching Cabbage-Pult are included as well, to help even the odds.

Blind Mystery Packs will also be available for $3.99, offering a random selection of eight different characters from the game.

K’nex has already struck gold with their line of Super Mario-themed sets, and while Plants Vs. Zombies isn’t the worldwide marketing force that Mario is, its popularity and playability should make it a good match for “America’s Building Toy.”