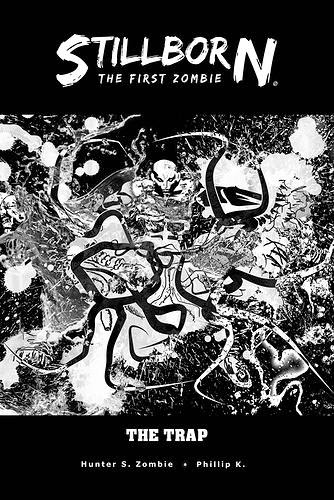 Many people know that in 1968, George A. Romero made "Night of the Living Dead". What most people don't know is that he did not properly register for the copyrights. This made the film public domain and George lost out on millions.
Indie comic writer Hunter S. Zombie, and illustrator Phillip K., creators of Stillborn: The First Zombie, decided to pay homage to the Godfather of Zombies.
Celebrating their first TPB release, the Stillborn creators are giving ten percent of every copy sold, both print and digital, to George A. Romero.
"We're an underground comic so we don't have much to give," said Phillip K. "But, regardless, it just felt like the right thing to do. I really hope it inspires other zombie artists to do the same."
Stillborn's first TPB, The Trap, follows a work crew into an old farmhouse deemed ready for demolition. Once inside, they are trapped and killed by an unstoppable zombie that not only thinks and speaks, but can command those that he has infected.
"Most stories follow a small group of survivors against a mass plague of zombies," said Hunter S. Zombie. "I wanted to flip that story on its head and give readers a front row seat to ground zero of the apocalypse."
The book launched at the Texas Frightmare Weekend horror convention in Dallas, TX, May 2-4, 2014. George A. Romero appeared along with Tobin Bell, Linda Blair, Tom Savini, and Linda Hamilton.
Stillborn is on sale for a limited time. Copies are available at Indyplanet.com, $10 (US) for print and $5 (US) for digital. Single issues are available on Kindle.