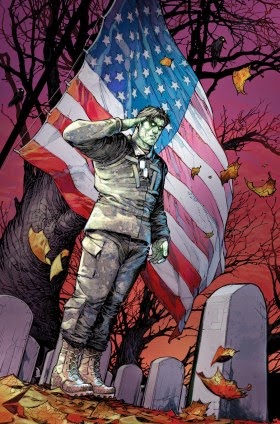 After being asked by DC Comics to reimagine iconic war comic protagonist Unknown Soldier (again) for the New 52, co-writers Jimmy Palmiotti and Justin Gray joked that "G.I. Combat" would have sold better if it was called "G.I. Zombie." That's what you call an aha! moment.
Bolstered by the iconic "Star-Spangled War Stories" title, a new horror/war series written by Palmiotti and Gray and illustrated by Scott Hampton arrives this July featuring Jared Kabe, also known as G.I. Zombie -- described by the fan-favorite writing team as funny, charming, serious, deadly and above all else, a soldier hungry for war -- and some brains, too.