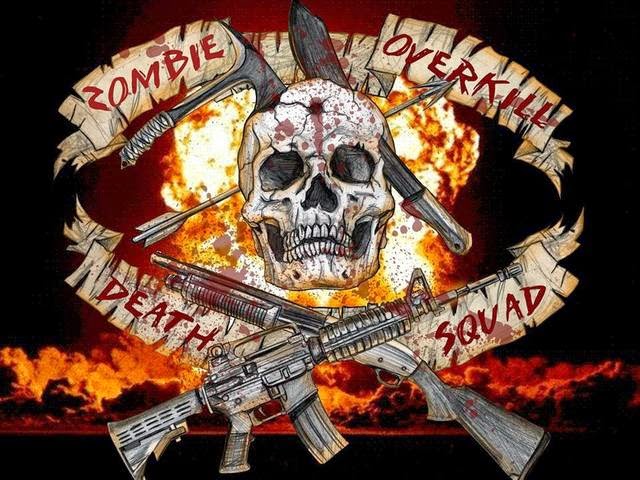 ZODS is a comic book series following an elite squad of survivors that wage an all or nothing war against an island of 82,888 zombies.


Zombie Overkill Death Squad is a story written out of my frustration with the lack of quality produced by Hollywood film studios, with the lack of interest from its writers and directors with half-ass explanations for the collapse of our military, short comings of local police departments and stories about people that have absolutely zero survival training.  Zombie Overkill Death Squad is a story about the survival of the fittest, a story that rewards characters that take precautions, that have the necessary training, that plan for disasters and follow a game plan.  Characters that have combat training, bunkers, weapons caches, and food supplies have a higher probability of surviving a zombie apocalypse than John Doe who doesn't exercise his 2nd amendment right to bare arms, doesn't keep a well stocked pantry, and works out by stuffing his face full of snack cakes and beer 7-days a week.
If you love zombies, then I've got a story for you.  Zombie Overkill Death Squad is a zombie horror story written for zombie fans.  From cover to cover ZODS is going to hit'em hard and hit'em fast, just how a zombie story should be told.
This issue is titled Zombie Overkill Death Squad: Kraven's Weapons and Tactics.  This issue is a walkthrough of some of the weapons and strategies that the Kraven's squad will execute to complete necessary survival missions and ambushes against the zombie hordes that inhabit the island of Newport County Rhode Island.
This comic book is 28 pages long, and my artist KC Anderson is 50% complete with the illustrations.

Risk and challenges are the same for me as they are for any other self-publisher. Not having the shelf space in the major book stores to reach our audience.

Zombie Overkill Death Squad is a story that has been playing out in my head for the past several years, and I am determined to share that story with my fellow zombie fans.

I am going to 100% self publish the Zombie Overkill Death Squad comic book series and with that comes the obstacle of reaching my readership slowly. I am confident that with the amount of passion that I have for this project, once I begin publishing, the readers will find me. If I am unable to reach my audience with Kickstarter, I will continue to soldier on and distribute my comic book at Conventions across the U.S. and upgrade my website to receive preorders from my readership.

The story is written, I have a skilled artist steadily completing the illustrations, and I have a publisher standing by.

For more info or to make a pledge, click here!