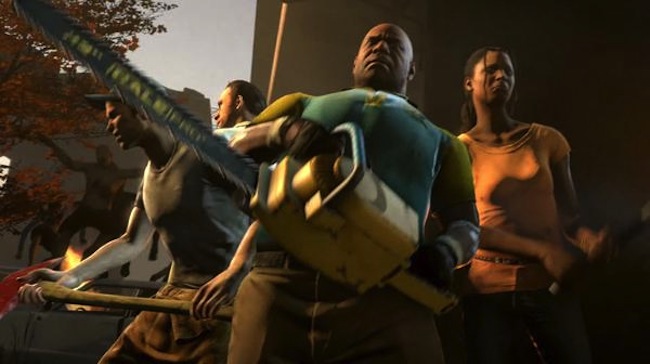 Resident Evil creator Capcom and Left 4 Dead developer Valve are teaming up for Resident Evil 6 (RE6) x Left 4 Dead 2 (L4D2), a crossover project that zombie dreams are made of. Zombie masses from Resident Evil 6 will stumble into L4D2 as ramped-up enemies, and the team of survivors fromL4D2 will become playable characters in RE6. Predictably, it’s all PC-based as modding the console versions would have meant a fair amount of red tape from Sony and Microsoft. The best part? It’s all free content that arrives 5 April for PC.
RE6 first. Coach, Nick, Ellis and Rochelle, plus the Witch and Mini Tank from L4D2 will feature as special characters, and each one will rock a unique weapon load out. These units will only be available in The ‘Mercenaries: No Mercy’ mode in RE6, and comes out 5 April. There’ll be an automatic and free download for all PC copies of Resident Evil. Mercenary mode is the Gears of War Horde mode forRE6, with a relentless wave of enemies attacking the player until dead. The L4D2 addition won’t be purely cosmetic at least, thanks in no small part to the special weapon load outs.
L4D2 now. The PC version receives three of RE6’s “most fearsome” enemies. Namely the Lepotitsa, Napad and Ogroman. Yeah, the names are meaningless to us as well, but it’s the fear these beasts create that add to the thrills. Also, free download. Don’t make us repeat ourselves again. It’s a background download, you’ll never know its happening, you’ll get excellent new characters and its gratis. It should also fit naturally into the zombie mania of L4D2, which was truthfully growing a bit stale without new enemy types.
Both parties who worked on the RE6 x L4D2 cross over project were “huge fans” of each others games. Meanwhile, chew into this delicious video:
Posted by Zombob at 9:18 PM