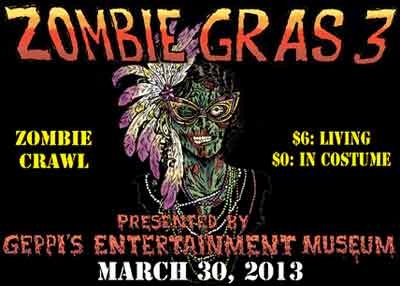 Zombie Gras will be invading Baltimore’s Inner Harbor on Saturday, March 30th, 2013, from 10am until 6pm. Zombies will start at Geppi’s Entertainment Museum at 10am where make-up artists, vendors & characters will be roaming the halls as well as a special appearance by the award winning Pixilated Photobooth. On the 35th Anniversary of Dawn of the Dead, there will be a special guest appearance by Jim Krut, the Helicopter Zombie, from the George Romero’s film.