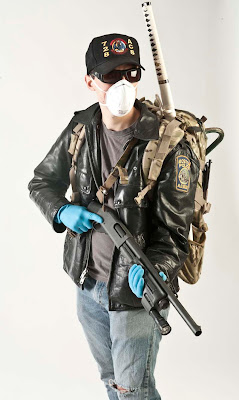 The U.S. government is now acknowledging what many have feared for years: The zombies are coming. Top officials are urging all Americans to prepare for war.
Assistant Surgeon General Rear Adm. Ali Khan, the Centers for Disease Control and Prevention’s director of public health preparedness, issued an official warning May 16 on the Public Health Matters blog. It’s not a joke (although maybe it should be).
“When zombies are hungry, they won’t stop until they get food, which means you need to get out of town fast,” Khan wrote in his nationwide alert. “Plan where you would go and multiple routes you would take ahead of time so that the flesh eaters don’t have a chance.” Meanwhile, military planning is well underway — some of it serious, some if it humorous, and some of it not quite one or the other.
Common threads remain: Study your enemy, master your weapons and keep your ears trained for the drums of war.“In every smoke pit, every circle of Marines in the field, every bored squad in the hooch, the subject of the zombie apocalypse comes up,” wrote former Marine grunt and Iraq veteran Maximilian Uriarte in his blog, Terminal Lance. “The subject of zombie plans — from crowbars to escape routes — is discussed in full detail amongst each other, often for hours at a time.”
Because you just never know.

The biggest mistake you can make is underestimating this particular enemy.
Scott Kenemore, author of “The Art of Zombie Warfare,” argues that zombie preparation has more to do with mindset than the gear you bring to the battle.
First and foremost, he says, you’ve got to keep your head.
To fight zombies, fight like zombies — with raw, unbridled fearlessness, brute strength, a taste for blood and a keep-it-simple approach to tactics.
“Whether grizzled veteran or paled neophyte, let your soldiers know they are about to experience a considerable paradigm shift from any fighting style or battlefield tactics they may have known previously. Tell your troops that a soldier who thinks he ‘knows how to fight’ will end up dead and useless if he tries to use his traditional tactics,” Kenemore writes.
Contingency plans will call for containment of zombie outbreaks, with quarantines expected. U.S. troops likely will be ordered to lay siege on entire cities. Instead of going on the offensive to clear pockets of resistance, they’ll have to keep thousands, if not millions, from breaking free.
“We’re going to have to redesign warfare as we know it,” says Navy Lt. J.L. Bourne, author of the “Day by Day Armageddon” series of novels examining worst-case zombie scenarios. An active-duty aviator just finishing a tour for a major intelligence agency in Washington, D.C., Bourne says, “We’re going to have to come up with ways to round up these things and eliminate them en masse. There won’t be enough bullets left to kill them all.”

Disaster preparedness proponents and the Zombie Squad, an “elite zombie suppression task force,” stress that “if you’re ready for zombies, you’re ready for anything.” Because nothing gets you “ready for anything” like running into a bunch of slavering ghouls with an unchecked taste for human flesh.
No doubt, this will be scary, and the panic-addled masses will only complicate matters. So author and D.C.-based counterinsurgency expert Brad Thor recommends you get ahold of some essential reading now.
“The one handbook you’ll want in your rucksack when this goes down and you’re fighting like an insurgent is ‘Total Resistance: Swiss Army Guide to Guerrilla Warfare [and Underground Operations],‘“ Thor says. “This is the Swiss looking at how they would handle being completely overrun with barbarians completely inside the gate.”
More must-haves:
A can of spray paint or chalk to mark areas that have been cleared. That tactic will come in handy when you’re searching a dark hospital basement for medical supplies.
When things come to blows, you’ll be glad you dumped your heavy battle rattle for simple protective gear that will keep you light on your feet and infection-free. A supply of medical face masks and surgical gloves are a no-brainer, but to keep all that blood at bay, try a heavy rubber butcher’s apron.

Perhaps the single hottest topic of debate among necro-warfare experts is what makes the ideal weapon against the undead.
Fortunately, as anyone who has seen the “Living Dead” movies knows, the possibilities are infinite — anything that will take out a zombie’s brain will do the trick.
Former Marine and “Top Shot Season 2” champ Chris Reed says he would keep it simple.
“A good Ruger .22 is hard to beat for your typical zombie killing,” Reed says. (His perfect deadpan delivery inspired our take on this story.)
Others worry that a .22 round just won’t have the stopping power needed for zombie headshots. “The .22 won’t get skull penetration beyond 100 yards,” Bourne says. Instead, he’d grab an M4 carbine or — better yet — an AK47 for drag-through-the-mud-and-still-shoot reliability.
Outdoor Life shooting editor John Snow’s top pick: Lauer Custom Weaponry’s LCW15 Zombie Eliminator with the arrow gun attachment and Beta-C 100-round ammunition drum. For backups, he says he’d add the Remington Model 870 Shotgun and Para Super Hawg .45-caliber pistol. All that might seem like overkill for something that’s not even alive — or real — but among the ranks of zombie hunters, you can never be too careful.
Of course, firearms need plenty of ammo and maintenance. That’s why Matt Mogk, president of the Zombie Research Society, prefers simple, lightweight and silent — a baseball bat, metal pipe or other blunt, maintenance-free implement that will deliver a head-crushing blow.
While the simple crowbar and more elegant katana, favored by ancient samurai warriors, typically top zombie fighters’ list of cold steel, Mogk says he isn’t a fan of bladed weapons.
“You have to keep swords sharp, especially if you’re to trying take off heads. Plus, it’s too easy for them to get stuck inside a zombie. Then you’re really hosed.”

Anyone who’s seen the film “Zombieland” knows the end of the world will require a decent set of wheels.
Forget heavy armored vehicles, Bourne says — too much upkeep. The Marine Corps’ LAV-25 or an Army Stryker would be better choices. “At least with an LAV, when a tire goes out, you can just raise the axle and keep driving” — although you won’t get far if you can’t refuel.
Going old-school cavalry may be tempting, but keep in mind that horses could be just as susceptible to zombie bites as humans.
Consider a two-wheeler instead. Bourne recommends a motorcycle that can handle the on-road, off-road weaving and dodging that will be necessary when running zombie speed traps, not to mention all the garden-variety gridlock that comes with any apocalypse. His pick: The 60-mpg Kawasaki KLR650.
Or Bourne suggests heading out to sea. A boat offers natural protection, but fuel will quickly become an issue unless you’re lucky enough to have a nuclear-powered aircraft carrier or submarine at your disposal — or perhaps an oil tanker and a refinery.
“Ideally, you get a sturdy sailing ship that you can man with five to 10 people and you can roam up and down the coast doing quick-hit raids to gather supplies,” Bourne says.