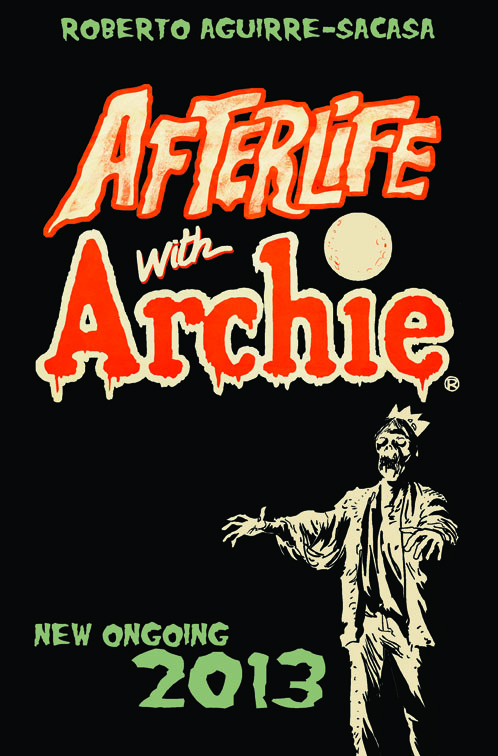 Official Press Release
Archie Comics, the leading mass market comic book publisher in the world and home to some of the most recognizable pop culture characters, is proud to announce a brand new ongoing series being added to Archie’s line-up entitled: AFTERLIFE WITH ARCHIE.
What if the zombie apocalypse began in Riverdale? This horror-infused comic answers that question when it kicks off in late 2013, spearheaded by one of Hollywood’s hottest writers, Roberto Aguirre-Sacasa, who will be fresh off the high profile crossover, ARCHIE MEETS GLEE.
AFTERLIFE WITH ARCHIE will provide readers with zombie-filled mayhem like only Archie can, taking the Riverdale gang where they’ve never been before – to the grave and back.
In addition to his Archie credits, Aguirre-Sacasa has made a name for himself in the world of television (writer/producer on GLEE), Broadway musicals (Spider-Man: Turn Off the Dark), and movies, penning the remake of Stephen King’s Carrie, which premieres this fall.
“Roberto’s a superstar writer,” said Archie Co-CEO Jon Goldwater. “Working with him on the upcoming AFTERLIFE WITH ARCHIE is the next step in the ever expanding Archie universe.”
"AFTERLIFE WITH ARCHIE combines two of my great passions: Archie comics and horror comics,” said Aguirre-Sacasa. “This series came out of conversations with Jon [Goldwater], asking questions like, ‘what if the Archie characters found themselves in a Stephen King novel like The Stand or a Sam Raimi movie like The Evil Dead?’ Could we pull that off, tonally? We’re really going for it. The first arc is called ‘Escape from Riverdale.’ The second arc is called, brace yourself, ‘Betty RIP.’ Of course, all the horror stuff will be balanced by elements that are quintessentially Archie.”