Of Nerds and Zombies 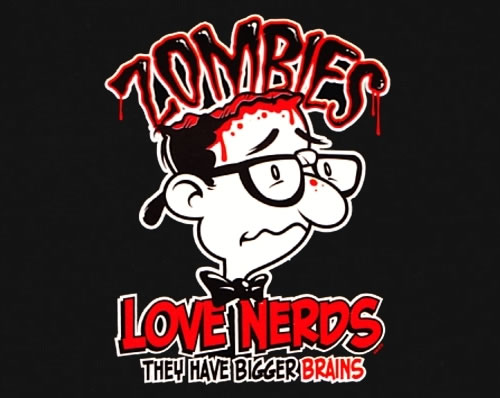 I saw the best minds of my area of concentration: well-fed, socially awkward, frumps milling about an airport Marriott in the early afternoon, looking for a live wall socket.
I knew these were my people by the graying ponytails and bow ties, print pantsuits worn with Native American statement jewelry, floor-length velvet dresses, socks worn with sandals and thick framed look-at-me hipster glasses. No elbow patches, but some doofus was wearing an Indiana Jones hat. (Oh wait, that was me.) We're a motley crew: we few, we otherwise unemployable few, we humanities academics.
But this wasn't just any gaggle of professors and graduate students: These are the nerd kings. For this is IAFA: the International Association for the Fantastic in the Arts. These are the leading scholars working on vampires, and androids, and aliens, science fiction, fan fic, and steam punk. They know how to pronounce "Cthulhu" and what a TARDIS is. I'm betting some of them speak Elvish, others, Klingon. And they could outlive you in a zombie apocalypse. Why? Because they've read every book on the subject.
Usually when I go to an academic conference I'm there to present recent work, but I've come to Orlando to orbit a constellation of airport hotels and conduct research, to take the pulse of the zombie zeitgeist.
A few weeks ago, an AP reporter asked me why I thought zombies seem to be so popular right now. Having studied the myth for the past decade, I gave her a range of probable answers, yet, I was troubled when the article came out, for I had only given my opinions about what makes the zombie important, when the thing about zombies is that they come in droves.
At IAFA I asked everyone for their opinion on this matter; I spoke not just with professors and graduate students, but with fantasy authors, horror bloggers, and a rag tag bunch of local fanboys. I received tweets and emails from people I have never met. To me, the utopian promise of this dystopian monster is the way that zombies defy individuality. Rather than playing resident expert, I wanted to channel all the voices, and let the horde speak.
I sing the zombie collective; here is what it says:
Zombies are "about"...
Capitalism.
Neo-liberalism.
In the age of hyper consumption, our "monster of choice" is a consumer. The zombie is a way of excoriating ourselves for our consumerism, which "we love to hate."
The zombie is about climate change.
Zombies are popular because we sense that we are threatened with extinction but that the real culprit won't be alien invasion or artificial intelligence, but our own destruction of ourselves through our consumption of natural resources.
That, post-Cold War, the only thing we have to fear is ourselves.
And our crimes against nature.
Zombies may represent the trauma of 9/11, and fear of terrorists.
Are they stand-ins for a generation of walking wounded, returning from fruitless wars?
Or are they bigger than that: viral pandemics as globalization?
Zombies are about social media and the way they make us anti-social, disembodied specters; the zombie represents that which we have left behind (our bodies) in an increasingly virtual world.
Zombies are about overpopulation.
And the increasingly aging population
And the medical technology extending life well past when it is livable.
Zombies are convenient:
All the fun of killing someone with none of the guilt. (This, from an androgynous undergrad playing a portable video game.)
Zombies are versatile, "a very relatable thing;"
The metaphor can be made to stand for anything.
One man said zombies are hipsters, "Give them a PBR and send them on their way." Another (probably a hipster) said, "Zombies are the Tea Party."
Forget zombies. What about the survivors, like on AMC's The Walking Dead?
In post-apocalyptic scenarios, the everyday annoyances of life have been removed.
Life becomes more meaningful when you're just trying to survive.
Zombies represent a collective yearning for a simpler time.
Zombie stories are love letters to libertarianism. Survival is about the individual and represents a coded concern about governmental control. These scenarios provide "the straight white male with a fantasy space in which he becomes useful again."
They are narratives of subjectless power, a convenient bogeyman for a world driven by forces that have no subjective agency: Mother Nature, global pandemics, the political machine at work beyond the individual's reach.
The fluctuations in the market.
Capital.
The acceleration of technology.
Zombies represent a moral panic about our lack of agency in the forces affecting our own lived lives.
Zombies are already dead, over. This wave has crested and its popularity (at least in fiction sales) is no longer on the rise.
Zombies are cyclical, about the way we are haunted by history;
Zombies are the postmodern monster, about repetition and the fact that there is nothing new, that everything is always happening all over again.
They're here to stay.
And: They'll be back.
That's the truth about zombies. Because as living and dead, they are complicated, complex, hybrid creatures that are never just one thing.
(But both. And neither.)