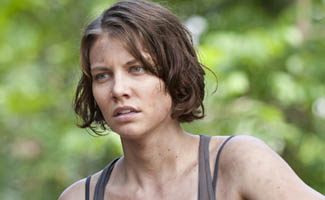 Actress Lauren Cohan, who plays Maggie Greene on AMC's The Walking Dead, talks about her big make-out scene with Glenn in Episode 13 and her philosophy on love in the apocalypse.
Q: It's been a challenging season for Maggie. Has that affected you personally as well?
A: It's stressed me out a little bit, but I feel the writers are writing to my emotional self. I'm very good at being emotional like that. That's something they've probably recognized and written to, so it's been a very rewarding season for me. Fun is not something you think of when talking about the apocalypse, but it really has been enjoyable. If somebody is going through emotional gut-wrenching material, it's pretty serious. But if we have time and if we have to jump off a car and slash somebody's head open, we do have fun with that.
Q: Maggie has many roles on the show, "lover" and "daughter" foremost among them. Which do you favor?
A: As much as I love the romance between Maggie and Glenn, I just really love seeing the father-daughter relationship done right on-screen. Maybe it's because I have two dads, I don't know -- my mother remarried when I was about 7; my biological dad and I are very close and my step-dad and I are very close. My moral dilemma is always which one is going to walk me down the aisle, when the day comes.
Q: You recently tweeted about the differences between British and American actors. What are some of the differences between these two camps on set?
A: I don't really see that distinction between England or America on set. Andy [Lincoln] speaks with an American accent all the time, David Morrissey speaks with an American accent all the time, and we're all a bit method when we're out there. The only surreal part of it for me is seeing everyone on the weekends: Andy wears glasses and speaks like an English person.
Q: You have a pretty intense sex scene with Glenn in Episode 13. Were you nervous at all about shooting that?
A: No, because I really trust the crew. At the end of the day what's on camera is there forever, and I don't want it to look fake or self-conscious. There's also only so much that people can show on cable, but we wanted to do justice to this couple in love. They have this stubborn argument that has lasted for days and weeks and it was this healing moment. I think it's a beautiful scene.
Q: Has it been the genesis for any jokes between you and Steven Yeun?
A: We are constantly joking about it! All of our fans are convinced we're an actual couple. When I went on a road trip with my dad, I was taking pictures of where I was and putting it on Twitter and people were writing, "Lauren, we all know that when you say dad you really mean Steven." It has become a running joke for us. If we post any picture of the two of us sitting together, people start saying things.
Q: You gotta balance love and war.
A: You really do, and that's why we were quite OK with it being a passionate scene. That's the difference with European and American television. You can have someone's brain pulled out through their ear but you can't show a nipple. My feeling is always make love, not zombies. We're killing it with this show -- literally killing it!